Posted on May 23, 2015 by scoreboardjournalism

A slight departure before the Premier League season is completed on Sunday as this evening there is the small matter of the Eurovision Song Contest in Vienna. This is an opportunity for a little forecasting of tonight’s result and so I asked my friend and colleague Boudewijn de Jongh, who occasionally tweets as @oneminutecoach, if I could translate his original Dutch articles into a post here and forecast the competition this evening.

Televoting
Boudewijn is an expert on Eurovision song contest televoting patterns and used that method to attempt to forecast the 20 countries who would progress to tonight’s final and join the seven nations who qualified automatically. His work analysing televoting has revealed that the countries which made up the former Yugoslavia vote for each other the most, followed by those from the former Soviet Union, the Iberian peninsula, the five Nordic countries and finally the three Baltic states. The reasons for this are debatable but I personally favour the idea that there is nothing more going on here than songs from neighbouring countries being closer to the voting nation’s own cultural experience.

As well as those blocs, there are also pairs of countries who tend to vote for one another. So, Cyprus will always give its maximum points to Greece, and vice versa. Pretty much the same goes for Romania and Moldova.

Success with the semis
The two semi-finals were forecast using only this information and correctly predicted the elimination of Finland, Macedonia and Belarus from semi-final 1 with Switzerland, Portugal, San Marino and the Czech Republic going out from the second semi-final as expected. So, a method which took absolutely no account of the quality of the songs correctly predicted more than 50% of the countries who failed to reach this evening’s Eurovision Song Contest final. Quite impressive.

The countries who “unexpectedly” progressed all had strong songs so it is possible to beat the televoting effect by delivering a quality song. If you don’t believe that quality is an objective thing in this context, it is interesting to note that historically the semi-final results, which are not revealed until after the final, are very closely related to the results in the final. This is despite the fact that different people are voting as only a certain set of countries, and juries, vote in each of those semi-finals. For example, in the 2014 Eurovision Song Contest, Austria and the Netherlands won the two qualifying events before finishing first and second in the final.

Song quality
To improve the already impressive forecast based on televoting, it was therefore necessary to take some measure of the quality of the songs. The juries, whose assessment counts for 50% do this and part of the voting patterns from people at home can be explained by song quality. A quick and dirty method, which was all that there was time for, is to use bookmakers’ odds in some way. Not just a direct rank order as some of the other information is already baked into these odds though so, in this case Italy is rated as the country with the best song as opposed to Sweden who currently top the odds. Below is the full forecast from @oneminutecoach along with points. 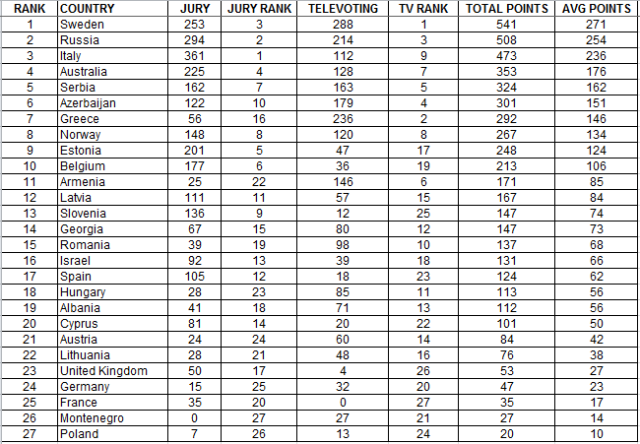 Europhoria again for Sweden
So, it is Sweden who can be expected to be in europhoria at the end of the competition, just as they were in 2012 when Loreen won with “Euphoria”. This is not because Sweden has the best song but because they have a very strong song, thus picking up the minor points across the board but profit additionally from the Nordic countries’ voting patterns.

The country which suffers the most is Belgium who are ranked as having the sixth best song but due to not receiving votes from like-minded neighbours outside of the Netherlands drop down the table somewhat.

The order of songs has been taken into account which, as Sweden goes 10th has cost them a little in comparison to Russia (25th) and Italy (27th) who have more favourable positions to be retained in the minds of the voters at home. However, this does not affect Sweden adversely enough to give the victory to either of their rivals. Pens and papers at the ready? Let’s see how it all pans out

2 Responses to Forecasting Eurovision: Europhoria expected in the North