Our Lions XVs – how close were they?

Posted on July 14, 2017 by scoreboardjournalism

Everyone loves making our British and Irish Lions starting XVs, a pursuit which starts a long time before the players are named, let alone steppimg on an aeroplane to Australia, New Zealand or South Africa. This year, and probably last year too, was no different. Fans, blogs, journalists, ex-players and others all had a go and once the three Tests had been played, it was possible to see how close or otherwise they came to Warren Gatland’s selections. An impressive 11 starters was the best score but others managed to name as few as five of those who started a Test in New Zealand.

Back in March, as soon as the Six Nations had finished, a glut of Lions starting XVs arrived. I have collected 42 which were published on blogs or other more traditional media. Some were from journalists, others amateur writers as well as the usual suspects of commentators, pundits and ex-players.

A total of 51 players were named in these 42 teams, ranging in popularity from Owen Farrell who was named in 40 of the 42 teams to the 11 players who were named once each. First Test starters Peter O’Mahony and Toby Faletau were amongst those 11 with one mention, and all 18 players who eventually started the Test matches were picked.

This shows just how hard it can be to attempt to name a team, even only three months out with evidence of the most recent international tournament at your fingertips. Former BBC analyst Keith Wood put it best when asked to name his Lions XV as one of his final tasks;

“At this moment I just can’t pick a Lions XV. We are in the middle of March and the first Test is not for more than three months. There are so many factors to consider.”

The 51 players selected in the 42 teams are shown below with how many times they were picked. Those with an asterisk were not picked in Warren Gatland’s original Lions squad of 41 which was named around a month after these teams were published.

Three of the seven most frequently named players – George North, Billy Vunipola and Stuart Hogg – didn’t start a single match due to injury (North was the last to be ruled out but was available for selection for the First Test), those naming Lions XVs back in March were already up against it. All of that trio were named in at least 36 of the 42 teams I collected.

So, onto the results. The team closest to Warren Gatland’s eventual selections came from Talksport commentator Andrew McKenna who named 11 players who went on to start in at least one of the Test matches. His only misses were Peter O’Mahony/Sean O’Brien at 6, Toby Faletau at 8, Jonathan Davies at 13 and Anthony Watson at 14. His team was one of only two of the 42 to contain Jamie George, Elliot Daly and Liam Williams.

On the whole, teams named by a group of people (“wisdom of the crowd” perhaps) tended to do well with the Press Association, RTE’s panel, the Wales Online combined team, the Daily Express writers team and a Sky Sports poll of over 16,000 viewers all naming nine or 10 of the eventual Lions starters in New Zealand.

Rugby fans: 3 months before the 1st Lions test, starting XVs were predicted. How many starters in any test did pundits get right on average?

I ran an online poll (see above) asking how many players from these teams actually started a Test match. My followers were pressimistic, going for between six and seven. However, across all 42 teams, the result was slightly better with 7.8 Test starters named on average.

The fewest Test players named in these teams was five. The Dead Ball Area’s guest blogger Michael Bolton named Furlong, Murray, Williams, Farrell and Watson correctly for example. The other two who managed only five actual Test starters in their XVs were former players Lewis Moody and Mike Phillips.

The best ex-player pundits at this exercise were Stuart Barnes with 10, Lawrence Dallaglio, and Shane Horgan as part of RTE’s panel, who scored nine. However, Horgan was one of three contributors to the RTE team with Eddie O’ Sullivan and Brent Pope so Barnes wins with Dallaglio second.

The BBC’s Jeremy Guscott should also get a mention as his was the only team to contain George Kruis and Ben Te’o, who both started the first Lions Test match. Guscott correctly named eight Lions Test starters, one fewer than his former England teammate Lawrence Dallaglio.

Of course, in the end naming a Lions XV is all a bit of fun and most are naming the teams we want to see play rather than making a serious prediction of who will play. Having said that, given how much more information the head coach has, I think we’d all be pleased to get as close to the eventual starters as Andrew McKenna did. Roll on South Africa 2021 when we can all do this again.

If you have got this far and know any more starting XVs named in March, please contact me on Twitter with a link and I’ll add them in.. 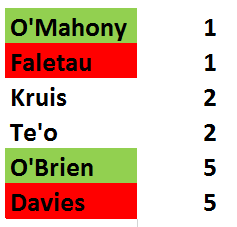 Finally some facts on each of the correct selections from most often picked to least often.

Owen Farrell
Lewis Moody & Jeremy Guscott were the only people not to name him.

Sam Warburton
Of those who correctly named at least eight Lions starters, only the RTE panel, Peter O’Reilly and Lawrence Dallaglio (both Sunday Times) failed to name Warburton.

Alun Wyn Jones
Of those who correctly named at least nine Lions starters, Lawrence Dallaglio was the only one who did not select Jones.

Maro Itoje
The i’s Hugh Godwin was the only one of those naming at least nine Lions Test starters not to name Maro Itoje. However, he was also one of only two people to select George Kruis who started ahead of Itoje in the First Test.

Sean O’Brien
Only named in five teams but three of them were from the Sunday Times (Stuart Barnes, Peter O’Reilly and Lawrence Dallaglio). Talksport’s Matt Smith and The Roar’s Adam Julian also selected O’Brien.

Jonathan Davies
Looks like he was a punt for most of those who named him. Three who included him – the Betting Expert data selection, Lewis Moody and Mike Phillips – correctly named six or fewer of the Test starters. Lawrence Dallaglio (Sunday Times) and Olly Hunter (Talksport) also selected Davies.

George Kruis
Only selected by Jeremy Guscott (BBC) and Hugh Godwin (The i).

Peter O’Mahony
Named as a Test starter by only Mick Cleary (Daily Telegraph).

2 Responses to Our Lions XVs – how close were they?