Are Liverpool really the Premier League’s most in-form team?

Posted on February 28, 2015 by scoreboardjournalism

Liverpool lead the Premier League form table based on the last 10 matches with 24 points out of a possible 30 but does this really make the Reds the most in-form team? Scoreboard Journalism investigated….

League tables showing current form have been used by media for many years and, as data has become easier to store, access and distribute, a variety of league tables can now be easily published to show how teams have performed over the last few matches, the current calendar year, since a particular date etc. However, all of these tables are flawed for one simple reason – they do not take account of the relative strengths of the teams playing in the matches which make up the league table.

As the table above shows, Liverpool are currently leading the form table which covers the last 10 matches with 24 points out of a possible 30 but these raw numbers do not provide enough information as Liverpool may have just had easy fixtures during that period. The Reds would be expected to get more points from a home match against QPR than from a visit to Stamford Bridge for example.

The number of points a team should have expected to get over a particular period can be calculated via a statistical model which can estimate odds like the Euro Club Index (http://www.euroclubindex.com). Turning those odds into expected points has been explained on this blog in an earlier post (https://scoreboardjournalism.wordpress.com/2012/09/01/how-to-avoid-rank-journalism-a-simple-expected-points-model/). Once expected points have been calculated, they can be compared to the points actually achieved and the differences ranked to produce a form table which takes account of how much better or worse the teams have performed in those matches compared to what would have been expected. Liverpool’s 24 points turn out to be just over six points higher than expected given the 10 fixtures played. Liverpool are therefore not the most in-form team on this basis but are beaten by one other club. 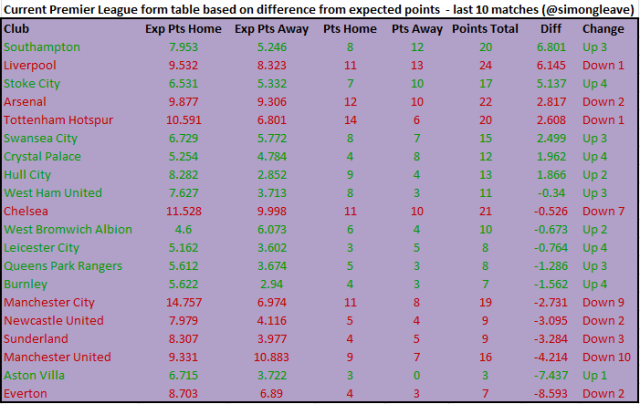 Arsenal, who are second on the raw points form table, are indeed overperforming with 22 points, 2.8 more than expected, but two other clubs – Southampton and Stoke City – have had greater levels of overachievement in the last 10 matches and move above the Gunners in comparison to the table based on raw points.

Both Manchester City and Manchester United have managed fewer points than were expected by the Euro Club Index in the last 10 matches and are therefore ranked 15th and 18th here as opposed to 6th and 8th in the more commonly used form table based on raw points. The worst team of all though is not Aston Villa with three points out of 30, as they were expected to only get around 10, but Everton with seven points instead of 16.

It is Ronald Koeman’s Southampton though who have been the biggest overachievers between the final round of matches before Christmas and last weekend (21-22 February) and therefore trump Liverpool as the best team during that period despite the Reds excellent haul of 24 points from 30, including last Sunday’s victory at St. Mary’s.

16 Responses to Are Liverpool really the Premier League’s most in-form team?