Posted on January 25, 2014 by scoreboardjournalism

The 2013-2014 FA Cup fourth round is in full swing with Arsenal’s 4-0 victory against Coventry City and Nottingham Forest’s goalless draw with Preston North End already consigned to the history books. Part of the romance of a cup competition are the giantkilling acts but the nature of these has been utterly transformed by the enormous quality differences across the clubs these days and often the biggest shocks are now taking place in matches involving two clubs from the same division.

To illustrate this phenomenon, I have identified every FA Cup match from the last 10 seasons in which the winner had odds of at least 6 according to Odds Portal which, for those who are more familiar with fractional odds, equates to 5/1. No matches in the 2004/2005, 2006/2007 or 2011/2012 FA Cup competitions were won by teams with odds this high whereas four fixtures in this year’s third round contained shocks of this magnitude. 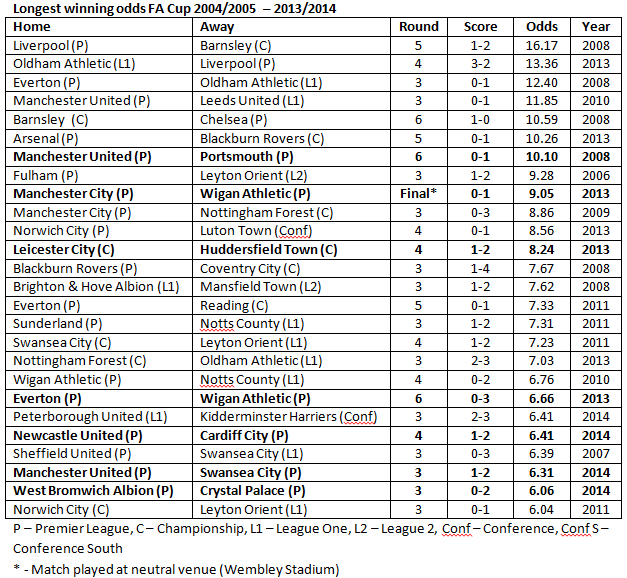 The most interesting thing in the above table is the sudden appearance, shown in bold, over the last two seasons of huge shocks in matches involving two clubs from the same division. Last season there were three, including the FA Cup final itself, probably the most surprising result in an FA Cup final for 25 years, since Wimbledon beat Liverpool 1-0 in 1988. This season, however, has already matched that figure with Cardiff, Swansea and Crystal Palace’s third round victories at St James’ Park, Old Trafford and the Hawthorns respectively. As a comparison, there was only one surprise of this magnitude in matches involving two teams from the same division in the eight seasons prior to last term; eventual 2007/2008 FA Cup winners Portsmouth’s quarter-final win at Manchester United. Huddersfield Town’s replay win at Leicester City last season was the first time in the 10 season sample that a Championship team had won an FA Cup fixture at odds of 6 or more at a fellow Championship team.

Cardiff’s third round victory at fellow Premier League team Newcastle United a few weeks ago is even the joint biggest surprise in this year’s competition, with non-league Kidderminster’s 3-2 win at League One ‘giants’ Peterborough United.

An FA Cup giantkilling has always been defined as knocking out a team from a division above but at a time when Nottingham Forest’s win against West Ham United was actually to be expected given Forest’s winning odds of 1.75 (between 8/11 and 4/5), is this the best definition? Sheffield United’s 2-1 win away to Aston Villa is an even more extreme example as, despite there being two divisions between the pair, this ‘shock’ was actually smaller than Crystal Palace’s win at Villa’s West Midlands neighbours West Bromwich Albion. At the time, both West Bromwich Albion and Crystal Palace occupied the bottom half of the Premier League table.

2 Responses to What is a giantkilling?